After I said YES of being in article, two ladies visited me to my home.
I was just so excited to be in Magazine, because I had this passion of encouraging other muslimahs to be themselves rather being what Japanese society expect them to be.
And I have explained so to ladies about my passion.


The article was supposed to be released in autumn 2015,
but it was delayed to release in the beginning of 2016.
That was the very first HALAL LIFE was released.
I think I have received for about 50 copies and added to all shipments for customers so that it will be widely known.
I thought that was it with HALAL LIFE.
But some time later, the lady who have interviewed me (from here we call her “M”) contacted me again whether we can discuss something serious.
I was not aware what she was thinking at that time, but I have arranged time to speak about it with her.
When we met she had asked me if I can run this magazine as taking her place since she is planning to leave Japan.
I was bit surprised with her offer, but I thought why not, I never done editing stuff in my life and its a great challenge and opportunity.
So I have decided to meet up with boss and M on the other day.


Before I met them I just found out that I am pregnant with 2nd baby.
I was overjoyed but same time felt like “omg, what I’m going to do with Magazine?!
They might cancel to recruit me if they know...?"
But anyway I cannot hide about it because eventually it will be exposed one day (lol) so at the meeting I told them in the very beginning that I was pregnant.


I didn’t expect that the Boss would tell me there are no problems about me being pregnant and he would still like to hire me.😲
I did ask the Boss why he would still hire me even though I am pregnant.
He answered that his aim is to offer a work place for women make them feel that kids or maternity is not obstacle in their career.

This is very rare in Japan, you might not believe it but this is very unlikely in this society.


I was, of course, thrilled because I can work in something related to Islam and help the community, thought it was a best job for a Muslim, and also I can work mostly from home!
But that time, everyone except my Boss did not know exactly what was his plan with my career at Halal Life.
==============================
I will continue this story to the following post.
That's it for today and please wait for the next part!

However please drop any comment here what's like in your country to work as a women, mother, and/or muslimah.
Jazakallah Khairan for reading this article!
NANA DARWEESH 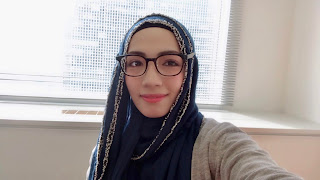 Popular posts from this blog

Date: January 22, 2019
Salam Ladies (and may be Gents!) 💐🧕🏻 Inshallah hope everyone is doing great!
Alhamdulillah the event I am going to host on 3rd Feb 2019 World Hijab Day (produced/funded by Nana Darweesh) Total of available tickets were 15 (since the venue is small place), And they were all sold out already with little more extra fund support!
Yaaaaaaaay!!!
Thank you so much everyone. I am going to film this for later to share on YouTube inshallah!
Now, I would like to let you know, that I have opened fundraising project for my YouTube Project “My Conversion”. I have received numerous positive feedback from all around the world since I have started this project. And in the other day I just completed editing the 3rd one and now the English subtitle is assigned to a volunteer person and waiting for completion. Once the English Subtitle is added, then I can post on YouTube.
The person in charge of English Subtitle, has given me feedback that she would like to hear a story from a Muslim who are living in complete di…
14 comments
Read more

Date: March 06, 2019
Salam Ladies (and may be Gents!) 💐🧕🏻
Inshallah hope everyone is doing great!
Alhamdulillah I have great announcement again after that Video was released. I am very happy to announce that finally I could commercialize, COMICALIZED ME in the Hoodie!

I found this great illustrator in Twitter and requested to draw me in MANGA style. I always wanted to design and sell clothes but had no idea how and had no talent either to design anything, but had this desire to make something just available from me. So I came up the idea to use myself to become comical character and add some slogan too. And here it is, I finally made it!

Buying within the store ships only within Japan, but can ship worldwide by different buying method. Online Store Link
In case of worldwide shipping, we only accept Credit/Debit Card payment through PayPal. If you wish to order, please send me email to: order[at]nailahalmuslima.com (replace [at] with @) With details such as, amount of units, colors and country where you live. I will…
4 comments
Read more

My First Blogging in English!

My Name is Nana Darweesh, happily married to Iraqi Man and have 2 beautiful children, not just wife and mom, but also works full time such as editing and blogging, YouTuber, Translator, Hijab Designer, online store manager and Film Producer!
I know I have too many titles, but I am just another #youraveragemuslim from Japan!

Pleased to meet you and hoping to continue this inshallah!